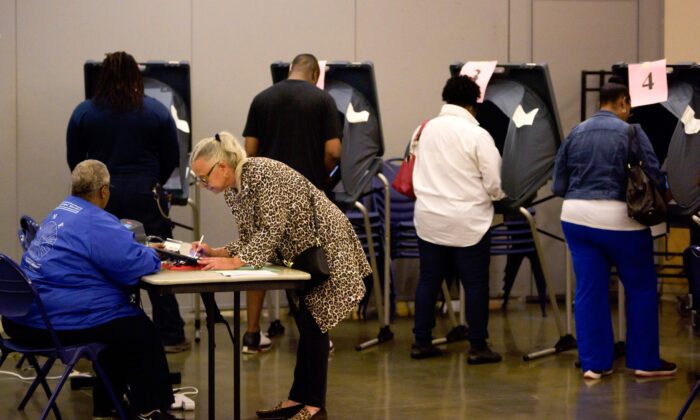 Ogg sent a letter to TDPS Executive Director Steven McGraw requesting assistance with the investigation into allegations of possible criminal conduct during the Nov. 8 elections.

“The Harris County District Attorney’s Office received a referral from the Secretary of State concerning alleged irregularities with the latest Harris County elections that potentially may include criminal conduct,” Ogg wrote on Monday.

“Please consider this my official request to engage the Texas rangers to assist my office in conducting the investigation into these allegations.”

The Democrat DA’s request came on the heels of Republican Gov. Greg Abbott’s call for an investigation into how the county runs its elections.

“I’m calling on the Secretary of State, the Attorney General’s Office, and the Texas Rangers to initiate investigations into allegations of improprieties in the way that the 2022 elections were conducted in Harris County,” Abbott said in a statement.

“The allegations of election improprieties in our state’s largest county may result from anything ranging from malfeasance to blatant criminal conduct. Voters in Harris County deserve to know what happened. Integrity in the election process is essential. To achieve that standard, a thorough investigation is warranted.”

Judge Elizabeth Curcek testified on Tuesday during Commissioner’s Court that her polling location in Spring was forced to halt voting due to a shortage of ballots despite multiple requests for supplies.

“You put us in an unsafe position by not having enough ballots.”

“The Harris County Elections Administrator’s Office is fully committed to transparency regarding the processes and procedures implemented for the November 8, 2022, Midterm Elections,” Tatum said in a statement to The Epoch Times.

Harris County GOP officials have filed a lawsuit against local election officials for alleged systemic issues with how the county runs its elections.

“We’re doing this in order to shed light on what has been happening, how Harris County actually runs their elections,” the county’s GOP Chair Cindy Siegel at a press conference.

“What we’ve seen over the past year, instead of it being just a few incidents of breakdowns and how the process has been run, we’ve seen what’s turned out to be a systemic cancer in how Harris County actually runs its elections.”

Harris County Democratic Party Chair Odus Evbagharu described Abbott’s call for an investigation as “yet another example of the political theater we’ve come to expect from our state leader.”

“It’s almost laughable that Abbott has demanded this investigation since he actually sent a team to oversee the Harris County elections last week. Was Abbott’s team ineffective? Will Abbott be investigating himself?” Evbagharu said in a statement.

“Our biggest concern about this is that Abbott and other GOP state leaders are trying to criminalize election workers.”

“Free and fair elections are the bedrock of our democracy,” the Democrat Ogg added in the debate on Wednesday.

“When we get credible complaints of election irregularities, we are statutorily required to investigate. That’s why we’ve called for the assistance of the Texas Rangers. The results of their investigation will be turned over to a Harris County grand jury.

“We do this regardless of the party affiliation of the complainants. After the 2020 election, we charged three Democrats and two Republicans. It is my duty as the elected District Attorney to follow the evidence and follow the law, and I will,” she said.