Defense Advocates Celebrate Acquittal of New Mexico Man Who Said Police Let Him Inside US Capitol on Jan. 6, 2021 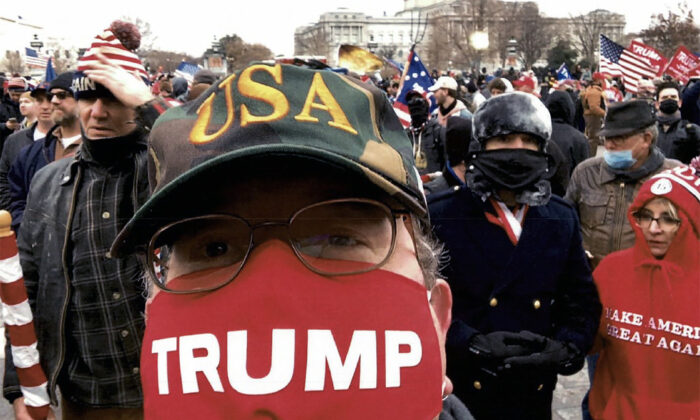 Matthew Martin, 43, of Santa Fe, N.M., outside the U.S. Capitol on Jan. 6, 2021. Martin was acquitted of four misdemeanor charges on April 6, 2022. (U.S. Department of Justice/Screenshot via The Epoch Times)
JUDICIARY

Defense Advocates Celebrate Acquittal of New Mexico Man Who Said Police Let Him Inside US Capitol on Jan. 6, 2021

Pundits and advocates for Jan. 6 defendants took to social media Wednesday to celebrate a New Mexico engineer’s acquittal on four misdemeanor charges from his time inside the U.S. Capitol on Jan. 6, 2021.

Judge Trevor N. McFadden found Matthew Martin, 43, of Santa Fe not guilty after a bench trial in U.S. District Court in Washington D.C. that lasted about a day and a half. It was the first full acquittal of a Jan. 6 defendant through three completed trials.

“I am very thankful for the judge’s verdict,” Martin told reporters outside the United States Courthouse, “and I’m hoping to get my life back together, get my job back.”

“I think the definitive factor was Matt Martin did not break the law, and we had the benefit of a lot of video evidence and the judge had a chance to see it,” Cron told reporters outside the courthouse. “Video evidence is the best evidence, and he did nothing wrong.”

Martin was charged with knowingly entering or remaining in a restricted building or grounds without lawful authority; engaging in disorderly or disruptive conduct in a restricted building or grounds with the intent to impede or disrupt orderly conduct of government business; violent entry and disorderly conduct in a Capitol building; and parading, demonstrating, or picketing in a Capitol building.

Commentators took the verdict as a hopeful sign and a perhaps a hedge against what some defense attorneys privately call a massive over-prosecution by the U.S. Department of Justice. More than 775 people have been arrested and charged with Jan. 6 offenses.

“Can’t trespass if you have a police escort,” wrote Sebastian Gorka, a former adviser to President Donald Trump and now host of a syndicated radio program.

Couy Griffin, the New Mexico founder of Cowboys for Trump who received a split verdict on his Jan. 6 misdemeanor charges before Judge McFadden in March, congratulated Martin. The judge found Griffin guilty of illegally entering restricted Capitol grounds on Jan. 6 but acquitted him of engaging in disorderly conduct. Griffin will be sentenced on June 17.

Julie Kelly, a senior contributor at American Greatness, said the verdicts were significant because U.S. Capitol Police admitted officers allowed people to walk into the Capitol.

Brandon Straka, founder of the Walk Away Campaign that invites liberals to leave the Democrat Party, said damage was already done to Martin’s reputation. Straka was sentenced in January to three years of probation and a $5,000 fine for engaging in disorderly and disruptive conduct in a Capitol building on Jan. 6.

Judge McFadden, appointed to the bench by Trump, said he found Martin’s stated belief that he was allowed into the Capitol by police to be plausible. Martin was more of a “silent observer” who acted in a similar fashion to a journalist, he said.

Prosecutors argued that Martin must have known he was entering restricted space because he passed signs that said the area was closed by police order, and filmed a broken window and a protester who appeared to have been maced and grimacing in pain. They noted that Martin texted a work supervisor that his Jan. 6 experience “was beautiful” and “a magical day in many ways.”

Martin, who testified in his own defense, said he didn’t think the “area closed” signs referred to the entire Capitol grounds. The comments to his supervisor referred to the Trump rally at the Ellipse and the whole day and not to the bad things that happened on Jan. 6.

After his April 2021 arrest, Martin was fired from his job with a federal contractor at the Los Alamos National Laboratory.