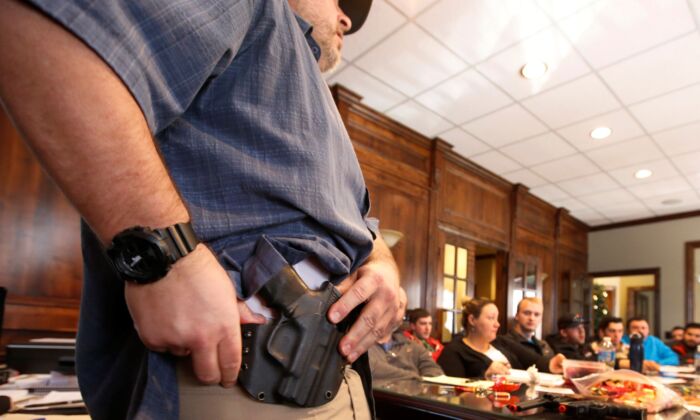 When Guy F. applied for a concealed carry weapon (CCW) license, the Los Angeles Police Department (LAPD) told him they are not accepting applications due to a systems update.

“They did not have a completion date available,” Guy told The Epoch Times.

The San Pedro resident declined to disclose his real name because he is fearful the information will be used against him.

“I need to be anonymous in this because if my name’s attached to it, they will for sure figure out some way to reject me when they finally do accept applications,” he said.

The LAPD has temporarily suspended the application process for concealed carry permits while it evaluates the U.S. Supreme Court’s landmark ruling in N.Y. State Rifle and Pistol Association v. Bruen.

“The direction from the chief of police is that we wait for guidance from the city attorney’s office as to the development of appropriate CCW guidelines before we start issuing the licenses,” said Norma Eisenman, LAPD media relations officer.

In Bruen, the U.S. Supreme Court eliminated good or proper cause requirements in concealed carry gun permitting with Justice Clarence Thomas explaining that permit regimes which do not require applicants to show an atypical need for armed self-defense are acceptable.

“The area providing the most concern is developing a standard for what constitutes good moral character in terms of ensuring fairness and equity to all of the CCW’s applicants in the process,” Eisenman told The Epoch Times.

However, the National Rifle Association (NRA) position is that Los Angeles city officials need to come to grips with the recognition in the Bruen decision of the right to self-defense outside the home.

“Suspending the concealed carry application process puts the law-abiding in an untenable situation with limited legal avenues to protect themselves and their loved ones,” said Dan Reid, NRA western regional director.

“If city officials truly wanted to address the crime raging through downtown Los Angeles, they can start by putting violent criminals in jail and put an end to ​their soft-on-crime policies, like no cash bail, that have turned the city into a nightmare.”

Guy, for example, has been a hunter all his life and owns three pistols but, at 70 years old, he has grown increasingly concerned about crime.

“They have moved a ton of halfway houses into the lower part of the city that are a mile-and-a-half to two-miles away, so my wife and I don’t feel safe,” he said. “I don’t understand what’s going on in California at all.”

While Los Angeles city attorney Mike Feuer did not immediately respond to requests for comment, the California Rifle and Pistol Association (CRPA) is preparing to sue to require compliance.

“Last week, we sent a letter to LAPD regarding these issues and informing them they are violating both the Bruen ruling and California law,” said Konstadinos Moros, an attorney representing the CRPA.

“Different issuing authorities have different issues, but not accepting applications at all is a common one we are seeing.”

The San Jose Police Department and other police departments across the state have also suspended their concealed carry permit application process.

“A version of that letter was sent, or will soon be sent, to several police and sheriff’s departments throughout the state, including some other nearby departments like Covina PD and Manhattan Beach PD,” Moros told The Epoch Times.

“If you continue to delay the issuance of concealed carry permits in violation of the law … CRPA is giving notice that legal action will be taken against these violations,” Moros wrote.

The letter to the LAPD was addressed to Chief Michel Moore and accuses the Department of not only refusing to accept applications for processing but also having unclear processes on how to apply for permits, endless wait times, subjective requirements, and application procedures that violate applicants’ privacy.

“Then someone turns in an application, they have to actually accept the application then that applicant must undergo a background check,” said Rick Travis, CRPA legislative director in Fullerton.

“It has to go through the Department of Justice here in the state, but for the police departments that got these letters, they’re not doing that.”

CRPA requested that the LAPD respond by Sept. 23 with a detailed and reasonable plan of how it intends to bring the department into compliance within 45 days. However, the LAPD has yet to respond.

“The department is finalizing its CCW application guidelines with the city attorney’s assistance, it shouldn’t be too much longer before the process is implemented and we start to process applications,” Eisenman said.

Given that neighboring police departments like Kern, San Bernadino, Riverside, and Orange County, have processes in place and are granting concealed carry permits, Travis believes the LAPD is picking and choosing who gets a permit.

“There are people in LA city government who do not believe that people should be able to have a CCW despite what the Supreme Court says,” he added.