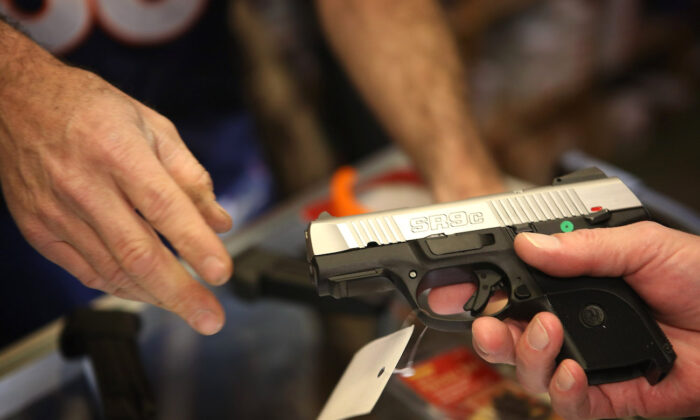 Florida officials have put forward a proposal to prohibit tracking firearms and ammunition purchases, arguing that the collection of data by state financial institutions violates the Second Amendment.

Florida Commissioner of Agriculture Wilton Simpson, along with State Sen. Danny Burgess and State Rep. John Snyder, argued that the adoption of the tracking codes would create a quasi-registry of Floridians who have bought guns and ammo legally.

“We are all blessed to live in the free state of Florida where our Second Amendment rights are valued and protected, but Democrats in Washington continue to try to chip away at these rights–and we must stay vigilant,”  Simpson, the former Senate president who was recently sworn in as agriculture commissioner, said in a statement.

Gun-control advocates and Democrats in Congress pushed for the International Organization for Standardization (ISO) to recently adopt new merchant category codes that can be used to identify retail sales of firearms and ammunition when made by credit card.

A coalition of national gun-control groups, including Guns Down America, Giffords, Brady, and New Yorkers Against Gun Violence, issued a joint statement applauding the new tracking codes when the ISO approved their creation in September 2022.

The groups said the decision “paves the way for credit card companies to help law enforcement preempt mass shootings and firearm trafficking by identifying suspicious patterns of firearms and ammunition purchases” via the merchant codes for some 9,000 federally licensed firearms dealers across America.

Major credit card companies have opted to implement the codes, with congressional Democrats applauding the decision in a letter (pdf) to executives at American Express, Mastercard, and Visa.

“This sensible decision also reflects a commitment to prevent gun violence and the unnecessary loss of life,” states the Oct. 20, 2022, letter, which was signed by 118 Democrats.

They argued that tracking firearm purchase data “only matters if your institutions are considering using that information to take further, harmful action—like infringing upon consumer privacy, inhibiting constitutionally protected purchases by selectively restricting the use of your payment systems, or otherwise withholding your financial services from targeted ‘disfavored’ merchants.”

The attorneys general warned they’re prepared to take legal action “to protect our citizens and consumers from unlawful attempts to undermine their constitutional rights.”

Tuesday’s move by Florida officials builds on that effort.

‘Line in the Sand’

Simpson suggested that there would be legal consequences for the tracking of firearm and ammunition purchases via the codes.

“The ‘Florida Arms and Ammo Act’ draws a line in the sand and tells multinational progressive financial institutions, and their allies in Washington, that they cannot covertly create a backdoor firearm registry of Floridians–or else,” Simpson said.

Burgess vowed to work closely with Snyder in the state legislature to get this “important” bill to Florida Gov. Ron DeSantis’s desk by the end of the year.

“This is the United States of America. You don’t get penalized for exercising a constitutional right,” Burgess said in a statement. “The Second Amendment is nonnegotiable, and here in Florida, we are going to fight to protect the rights of Floridians,” he added.

Snyder warned that the use of the tracking codes would create a “comprehensive database of law-abiding Floridians” that the proposed legislation would prevent. “Gun owners will not be targeted by financial institutions in the free state of Florida,” Snyder said.

The National Rifle Association (NRA) has also criticized the adoption of the firearm-specific merchant codes, calling them an erosion of Second Amendment rights.

“The decision to create a firearm-specific code is nothing more than a capitulation to anti-gun politicians and activists bent on eroding the rights of law-abiding Americans, one transaction at a time,” an NRA spokesperson said.

On the campaign trail and since taking office, President Joe Biden has pledged to get tougher on gun control, citing the need to curb gun-related violence.

Biden has publicly said he would back bills that ban magazines that carry 10 rounds or more—which are very common and are owned by millions of Americans—and so-called assault weapons, a term that some Republicans have said is not clearly defined and intentionally vague to allow the gun-control net to be cast more widely.

A widely cited study (pdf) released by the Department of Justice found that assault weapons were “rarely used” in gun crimes, but it concluded that the 1994 ban on them may have had a larger impact if it remained in place after 2004.

For years, Biden and Democrats have sought to criminalize what they describe as “high-capacity magazines,” which also dont’t have a clear definition, much like “assault weapons.”

Legislation introduced in 2021 in the Senate would ban magazines that hold more than 10 rounds, mirroring regulations in a dozen states, including California and New York.

The Department of Justice wrote in a 1999 report (pdf) that a 1994 federal ban on such magazines didn’t lead to a significant drop in shootings or murders.

In June 2022, Biden signed a gun=control measure into law, representing the most sweeping gun law in decades.

Key provisions of the legislation include expanding federal background checks for buyers between the ages of 18 and 21, adding incentives for states to adopt so-called red flag laws, expanding access to mental health programs, and enhancing school security in a bid to prevent mass shootings.