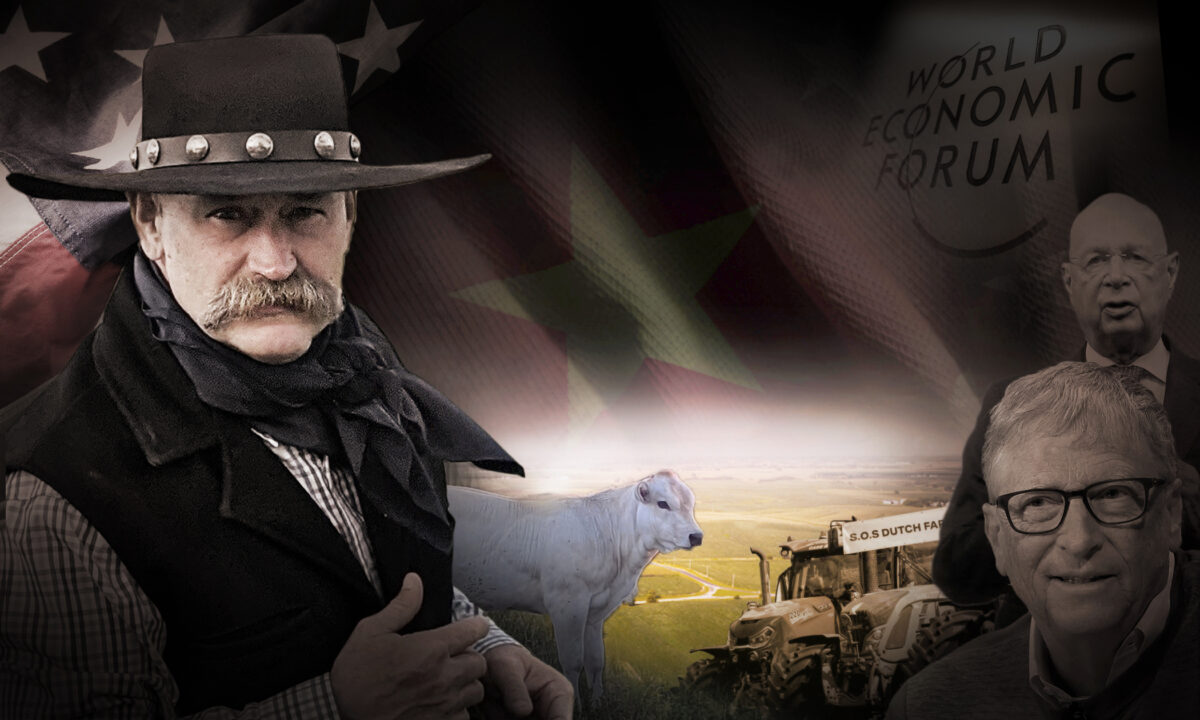 The Great Reset is hogwash.

So says one Nebraska rancher hailing from six generations of farmers dating to the 1830s. Hogwash—along with their global goals of “sustainability” being implemented across the United States and beyond: in Canada, the Netherlands, Belgium, Germany.

Trent Loos, 55, whose ancestors arrived on the land from Germany two centuries ago, knows what real sustainability looks like, and what makes it possible: fuel—precisely what globalist Klaus Schwab, the World Economic Forum (WEF), and their global partners want to nix by 2030 with their climate agenda. “Conservation is about producing more with less,” Loos told The Epoch Times. “In 1900, it took ten acres of land to produce enough food to feed one person per year. In 2021, it takes less than a third of an acre.”

That’s all thanks to diesel power.

And five of those ten acres went toward feeding mules and horses. Today, one gallon of diesel replaces 500 man-hours of labor. And that, says Loos, is the real reason for the attack on fossil fuels. “With fuel, we can continually get through the efficiency of producing more food with fewer inputs,” he said. “Without fuel, we go back to the horse-and-buggy days, which is a regression of 100 years.”

With every turn, governments globally—via carbon taxes, banning pipelines, making drilling impracticable, or sending tankers of fuel reserves to China—are driving fuel costs up, making sustainable farming less viable. The flipside of the burning candle is land. Biden’s Executive Order 14008—or “30 by 30” initiative—aims at removing 30 percent of land from food production by 2030. And as we watch 87,000 newly minted IRS agents roll out from the Inflation Reduction Act, we miss the $369 billion pouring into conservation programs.

“The whole concept of conservation has been hijacked by government officials who want to tell farmers how to take care of their land,” Loos said. “It’s about controlling people.” The rancher isn’t worried for his own family. Raising cattle and pigs, there’ll be food enough on their table. Worrying over the other 329.5 million Americans—especially those living in megalopolises like New York and Los Angeles—is what keeps Loos up at night.

Food security is a grave national security danger, he warns. The Chinese Communist Party (CCP)—China’s big brother administrative state—has been buying up enormous tracts of land in the United States, along with billionaires such as Bill Gates and Jeff Bezos, marching in lockstep with Klaus Schwab and the WEF. “China is buying our resources at an alarming rate,” he said. “So much of our medicine, so much of our vitamins and trace minerals, and things that we rely on [are] from China. And [they] are the only source in the world. They could hold us and are holding us hostage.”

The agenda to destabilize food security surfaced as early as 1995 when Hollywood blockbuster “Babe” came out, featuring an adorable talking pig gifted with human characteristics and qualities. There was more here than met the eye, Loos wagered. He was determined to penetrate the bottom of it, and so began attending animal rights functions nationwide. Having investigated this agenda for decades, Loos mounted a solo information counter offensive via talk radio, online platform Bek News, and other media. He’s visited 41 states in the past 15 months speaking, while his wife carries the ranch.

“I did not see the bigger picture, I thought that people just fell in love with animals. And so consequently we wanted to liberate [them],” Loos said. “Their bigger ploy was to demonize the ownership of animals because it leads to a bigger challenge for food security.”

Loos probed executives for the real causes behind their “love for animals;” and took notice when former New York Mayor Bill de Blasio took office in 2014 and, basically on day one, moved to ban the horse carriages in Central Park—which have operated since 1862. Though the carriage drivers stood their ground and the decision was revoked. Loos quizzed his senator, Deb Fischer of Nebraska, why she attended Davos’s WEF this past summer. She wouldn’t answer. “I can document this extremely well,” Loos said. “Her net wealth since she became senator, now in her second term, has exploded.”

Loos did eventually get to the bottom of what he believes this agenda is. “They’re demonizing the cow because the cow is the most important animal in God’s creation for planet health,” he said. “The cow consumes [from] 74 percent of the United States’ landmass—the world’s landmass. Seventy-four percent is not suitable for growing a crop to feed a human, but a ruminant animal with four chambers in its stomach can take cellulose material that you and I can’t eat and upcycle it into the most nutrient-dense food substance on the planet.”

He added, “With the cow, we can feed the world like we’ve never seen before. They’re trying to demonize the cow, saying that the cow is the contributor to climate change [through methane emissions], and you need to eat crickets. And who’s the largest investor in crickets in the world? A guy name Bill Gates.”

Since 2000, he has educated about the food system, where our food comes from, who’s producing it, how shortages could become reality, and how fruits of this agenda are now cropping up everywhere.

Today, a global goulash of climate implementations have rolled out, or are in the pipe. The U.S. Fish and Wildlife Service designated the monarch butterfly an endangered species, enabling the government to cordon off any section of land it deems “critical habitat.” The sage grouse was also declared “endangered;” despite a study showing otherwise, the government nevertheless proceeded labelling land “critical habitat.” There’s a goal to make a “Montana Serengeti,” removing some 3.2 million acres from the people’s use.

Beyond U.S. borders, the Canadian government aims to cut fertilizer by 30 percent by 2030 with its “Strengthened Climate Plan.” It aims to “reduce greenhouse gas (GHG) emissions, and increase carbon sequestration,” according to the government’s website; but this only effectuates more restraints growing food. Similar policies have surfaced across Europe. Apparently, The Great Reset is in full swing.

Yet not everyone has taken these measures lying down.

In the past several months, uprisings due to food shortage, or threats of potential shortage, have boiled over into revolts in Sri Lanka, the Netherlands, Belgium, and Bangladesh. In late August, Saskatchewan Premier Scott Moe stated if Justin Trudeau sends federal operatives to look at province farms—private property—without permission, they’d be arrested for trespassing. Farmers are getting increasingly vocal as The Great Reset unrelentingly lurches on.

“Now, people know or are paying attention to what’s happening with the farmer—I’ll call it ‘revolt.’ The Dutch farmers are just raising a fit,” Loos said. “Now that’s spilled over into many eastern European countries. … The Dutch government has been a leader in implementing this 30 by 30 initiative.”

But it’s not enough, he says. People need to wake up, yesterday.

“Every single day, the same thing is happening in the United States, and people are not paying attention how farmers are not able to use their land as they see fit,” he added.

What options have Americans now? Speak to their representatives in the house or senate, at state and federal levels; research Executive Order 14008, The World Economic Forum, and the UN’s agendas; share this knowledge with neighbors; not least of all, vote come November for candidates who’ll place America over the CCP, the climate-pushing globalists, and The Great Reset. Hogwash indeed.