Russian Troop Build-Up Hits 190,000; Most Significant in Europe Since WWII 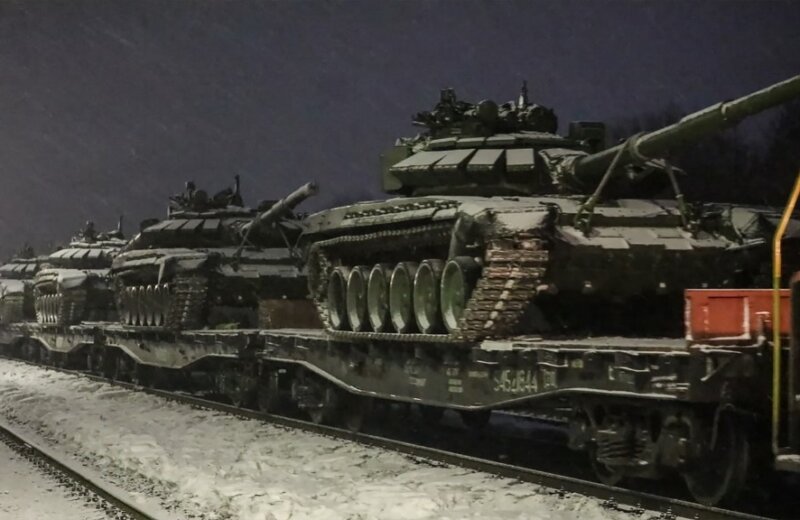 This handout video taken and released by the Russian Defence Ministry early on February 18, 2022, shows Russian tanks leaving for Russia after joint exercises of the armed forces of Russia and Belarus as part of an inspection of the Union State's Response Force, at a firing range near Brest. - Russia said on February 15, 2022 it was pulling back some of its forces near the Ukrainian border to their bases, in what would be the first major step towards de-escalation in weeks of crisis with the West. The move came amid an intense diplomatic effort to avert a feared Russian invasion of its pro-Western neighbour and after Moscow amassed more than 100,000 troops near Ukraine's borders. (Photo by Handout / Russian Defence Ministry / AFP) / RESTRICTED TO EDITORIAL USE - MANDATORY CREDIT "AFP PHOTO / RUSSIAN DEFENCE MINISTRY" - NO MARKETING - NO ADVERTISING CAMPAIGNS - DISTRIBUTED AS A SERVICE TO CLIENTS
Photo by AFP

US officials said on Feb. 18 that nearly 190,000 Russian troops now surround Ukraine, a number far higher than the 150,000 figure that most intelligence reports suggested only 48 hours ago.

An unnamed US military official told CNN that “this is the most significant military mobilization in Europe since World War II.”

US intelligence has estimated that Russia would gather a minimum of 175,000 troops at Ukraine’s frontiers before an assault could begin. Other intelligence estimates believe that a half million troops would be needed for a full out assault on the country.

US and NATO officials continue to maintain that Russian President Vladimir Putin could order an invasion of Ukraine at any moment.

The latest developments in the Ukraine crisis came as Russia began military exercises of its strategic nuclear force and continued military maneuvers in Belarus in conjunction with its troops.

They also came as the leader of the separatist republic in the Donetsk Oblast of Ukraine announced that he had ordered the evacuation of women and children to Russia in anticipation of a NATO attack. In the last several days Russian state-controlled media has falsely reported on dire situations, which Western intelligence sources believe are being used to prepare Russia’s citizens for war.

Biden and US Secretary of State Antony Blinken have warned of Russia using a “false flag” operation as a pretext for an invasion.

Blinken, who is with US Vice President Kamala Harris at the Munich Security Conference, said that he believes that the false provocations that the US and NATO leaders have warned about have begun.

Biden told the UN Security Council on Feb. 16 that Russia could use “a fabricated incident or an outrageous accusation” as a pretext to attack Ukraine.

International monitors have reported that in the last 48 hours shelling in eastern Ukraine has significantly increased.