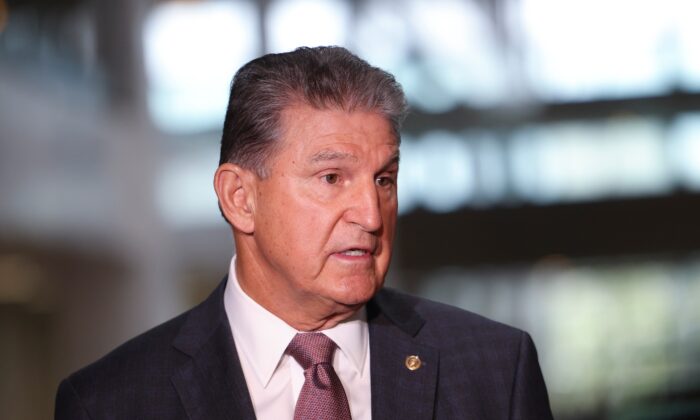 Sen. Joe Manchin (D-W.Va.) speaks to reporters outside of his office on Capitol Hill in Washington on Oct. 6, 2021. Manchin spoke on the debt limit and the infrastructure bill. (PKevin Dietsch/Getty Images)
DEMOCRATS

Manchin's support all but guarantees the bill's passage through the Senate.
By Joseph Lord
biggersmaller
Print
0:003:45

Sen. Joe Manchin (D-W.Va.) in a June 13 interview signaled his support for the gun control package hammered out after negotiations between Senate Republicans and Democrats, saying that the package should not concern law-abiding gun owners.

A bipartisan group of senators on June 12 announced the legislative package of gun control measures that include more resources for mental health needs, school safety, and more.

The proposal has the support of 10 Republican senators, which is needed in the 50–50 Senate to overcome any legislative filibuster. It was praised by Senate Majority Leader Chuck Schumer (D-N.Y.), a longtime proponent of gun control measures.

The plan calls for an “enhanced review process” for younger gun buyers.

For prospective buyers under 21 years of age, the plan “requires an investigative period to review juvenile and mental health records, including checks with state databases and local law enforcement,” according to their statement.

Notably, the framework bill includes a so-called red flag provision, allowing for “resources to states and tribes to create and administer laws that help ensure deadly weapons are kept out of the hands of individuals whom a court has determined to be a significant danger to themselves or others,” according to a June 12 statement by the group.

Now Manchin, a critical swing vote, has come out in support of the package.

During an appearance on CNN’s “The Lead with Jake Tapper,” Manchin claimed that gun owners in his state, a longtime red stronghold, want the federal government to take action, particularly on preventing mentally ill people from accessing weapons.

“We have to do something. And gun owners are standing up. You take polls around the country, in my state, too—law-abiding gun owners want something to be done,” Manchin said. “They don’t want people who should never have a gun, or is mentally incapacitated or not stable, to be able to access anything they want.”

The principles underlying the package, primarily prevention and intervention, are “something that’s sensible and reasonable,” Manchin said.

“We have got to take what we have got as a positive and work off of this. But this should not—this piece of legislation, as drafted, should not be threatening to any law-abiding citizen in the United States of America, not one. And no law-abiding gun owner should be offended by this,” Machin continued. “We take no rights away, no privileges away. We don’t basically threaten you’re going to lose anything at all.”

However, the inclusion of controversial red flag provisions—which allow the state to seize weapons from someone or prevent them from purchasing a weapon based on an anonymous tip that they may be a danger to themselves or others—has long been an issue that Second Amendment advocacy groups have rallied against.

The package, which has the support of 10 Republicans, is all but guaranteed to pass the 60-vote filibuster threshold with Manchin’s backing.

In the past, Manchin—one of the only Democrats hailing from GOP-dominated West Virginia—was among a faction of Democrats who expressed some discomfort with David Chipman, President Joe Biden’s first controversial pick to head the Bureau of Alcohol, Tobacco, and Firearms.

Eventually, skepticism from Manchin and other members of the Democrats’ Senate caucus forced Biden to withdraw Chipman’s nomination.

If it is passed by the Senate, the House—which is narrowly held by Democrats—is likely to quickly work to pass the bill.