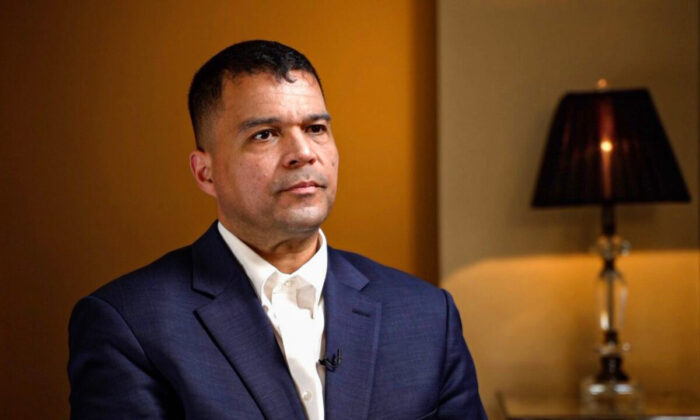 Dr. Paul Alexander in an interview with EpochTV's "Facts Matter" program. The interview is scheduled to premier on May 3, 2022. (Screenshot via The Epoch Times)
EXPERT VIEW

According to Dr. Paul Alexander, when former President Donald Trump was trying to tackle COVID-19 in 2020, the “swamp” or the “deep state” was working against him, using flawed data to tarnish him, locking down society, and keeping schools closed.

“They’re working against him. So you need to be there to understand when he said ‘the swamp’—and he talked about deep state—it is real. I dealt with them. It is the bureaucracy. The entrenched bureaucracy is real.”

From late March till early September 2020, Alexander served as scientific adviser to Michael Caputo, then-assistant secretary for public affairs at the Department of Health and Human Services (HHS).

During that time, Alexander was attacked by the media and some health agency officials for trying to “tweak” the COVID-19 death numbers in the CDC’s Morbidity and Mortality Weekly Report (MMWR).

On Aug. 8, 2020, in an email to Caputo (pdf) and other officials, Alexander wrote: “CDC to me appears to be writing hit pieces on the administration and meant at this time to impact school re-openings and they then send it to the media knowing it is deceiving. I ask it be stopped now! … Nothing to go out unless I read and agree with the findings how they CDC, wrote it and I tweak it to ensure it is fair and balanced and ‘complete.’ And not misleading.”

At the time, Alexander also pushed for herd immunity to handle the pandemic, insisting the only way to do so was to allow the non-high-risk groups to expose themselves to the virus.

However, some media outlets depicted Alexander’s proposal as trying to get people infected intentionally. They also claimed that Caputo was promoting unfounded accusations and conspiracy theories in a Facebook video. Pressure from the media and some government officials later led to the departure of Caputo and Alexander.

On Sept. 16, 2020, HHS announced that Caputo would take a 60-day medical leave of absence, and Alexander would leave the department.

“New York Times wrote—now it’s part of the public discussion—that the CDC reporting to the public and the data is suboptimal. It’s incomplete. It’s not balanced. It’s missing information. So that is exactly what I was trying to say two years ago, that I was attacked for,” said Alexander.

The New York Times on Feb. 20 reported that the CDC has been withholding critical COVID-19 data on boosters, hospitalizations, and other analyses. A CDC spokesperson told the outlet that one reason is the agency was afraid the data might be misinterpreted as the vaccines being ineffective.

In March, the CDC quietly removed 72,277 deaths, including 416 among children, that were said to have been from COVID-19 from its data tracker web page.

“The CDC removed 72,000 deaths. Why? I will say it this way, under the Trump administration, the CDC worked with the [National Institutes of Health (NIH)]  and the media to make the response terrible for him. Make it look, on a day-to-day basis, terrible, like bad. And they will do that with the numbers. They will report escalating infections, escalating cases, any which way they could,” said Alexander.

The CDC responded that the change was to make the data more accurate.

“CDC constantly reviews our COVID-19 data to ensure its accuracy,” a CDC spokesperson told The Epoch Times via email last month, adding that “CDC’s algorithm was accidentally counting deaths that were not COVID-19-related.”

Lockdown Based on Flawed Numbers

In early April 2020, the United States reported more than 260,000 COVID-19 cases and about 6,200 deaths. On April 1, 2020, Trump said he would leave it up to state governments to decide whether to implement lockdowns. A day later, Dr. Anthony Fauci, director of the National Institute of Allergy and Infectious Diseases, told CNN that there should be a federal lockdown. “I don’t understand why that’s not happening,” he said.

On March 20, 2020, California became the first state to order a lockdown. By the end of May 2020, 42 states and territories issued mandatory stay-at-home orders.

Alexander said the lockdowns were based on flawed numbers, and no study showed they work.

“They closed society on a test that had a 97 percent false positive,” said Alexander, referring to the PCR test that is still widely used to determine a positive COVID-19 infection.

HHS has been criticized for changing the rules for writing death certificates so that deaths were primarily attributable to COVID-19. The agency has also been targeted for a high number of false-positive COVID-19 results from PCR tests that were authorized for emergency use.

“We were having a problem at that point with the PCR test. The PCR tests [were] over-cycled, and we knew over 24 cycles,” said Alexander. “Once you cycle over 24, 25, you are picking up viral dust and viral junk, non-infectious, non-viable pathogens. So let me put it this way, the vast majority, maybe 90 percent of people in 2020 and 2021, who were designated as COVID-positive with PCR tests were false-positive.”

An Irish doctor first claimed that PCR tests have a false rate of 97 percent. Some fact-checkers deemed the claim as false.

One fact-checker interviewed Harvard professor Michael Mina, an epidemiologist, who said the claim was not true and “a clear misunderstanding of the PCR primers.”

However, Mina also told The New York Times in 2021 that “in Massachusetts, from 85 to 90 percent of people who tested positive in last July with a cycle threshold of 40 would have been deemed negative if the threshold were 30 cycles.”

On July 21, 2021, the CDC announced it would withdraw the request for an emergency use authorization for the agency-developed PCR test after Dec. 31, saying the Food and Drug Administration (FDA) has authorized “hundreds” of other COVID-specific tests.

“We’ve argued from the beginning, this was never an emergency that they made it out to be,” said Alexander. “We could have properly protected the vulnerable and let the rest of society live largely normal lives.”

Earlier this month, a study showed that states with strict lockdowns and other restrictive measures, such as California, New York, and New Jersey, handled the pandemic poorly. Florida, which ditched COVID-19 restrictions early, performed among the best states.

“Trump was working to open society and to open schools. And he had a daily battle with that task force that what you saw there—that was like a clown car show—that was real. Behind the scenes, Trump was fighting them, fighting Fauci, fighting [Dr. Deborah] Birx, and the union, and the CDC to open schools because we were getting reports of young children in America hanging themselves. Children across America committed suicide because of the school closures,” said Alexander.

In July 2020, Fauci warned parents not to send kids back to school in the fall semester, saying a study showed kids over 9 years old could transmit the CCP (Chinese Communist Party) virus as well as adults. The authors of the study later issued a correction, saying they could not define what direction transmission was happening within their study.

Birx, then-White House COVID-19 task force coordinator, told media in August 2020, “If you have high caseload and active community spread … we are asking people to distance learn at this moment, so we can get this epidemic under control.”

According to Dr. Scott Atlas, former special adviser to Trump on the coronavirus pandemic, only the three most influential doctors on the task force—Birx, Fauci, and then-CDC Director Dr. Robert Redfield—could advise governors to implement lockdowns.

“We could have handled this pandemic just by properly protecting the vulnerable and allowing everybody else to live a normal life, become exposed naturally and harmlessly among their own natural immunity,” said Alexander.

“That’s how we do it for the last 100 years. But with COVID, we’ve done something different. We lock the healthy society down.”

Alexander said he once had a discussion with some State Department officials talking about Trump.

“They told me in no uncertain terms that: ‘Trump is only a visitor here. He doesn’t seem to understand we run things.’”

“‘We the bureaucracy, we the deep state that you call the deep state pal, yes, we run things here. The president just visits here. He’ll be gone. We’ll be here,’” recalled Alexander.

“That’s how they think. And that is the crux of the matter.”