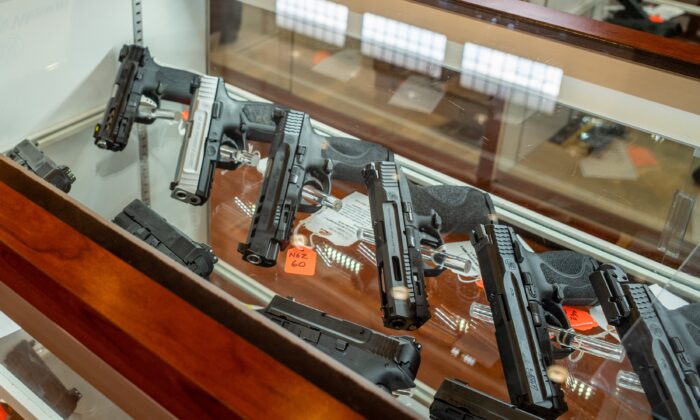 Handguns in a store in Houston, Texas, on Sept. 9, 2022. (Brandon Bell/Getty Images)
TEXAS

People as young as 18 can carry handguns in Texas after the state dropped an appeal of a recent order.

Texas officials were prepared to make their case against the order, which found a Texas law barring people aged 18–20 from carrying handguns unconstitutional, but abruptly asked to withdraw the appeal on Dec. 20, court records show.

Texas Department of Public Safety Director Steven McCraw asked the U.S. Court of Appeals for the Fifth Circuit for the withdrawal and the appeals court granted the unopposed request. McCraw did not say why the state, which filed a notice of appeal in September but never filed a brief outlining its position, was backing down. The department did not return a request for comment.

The Firearms Policy Coalition, which sued the state over the law, celebrated the move.

“We applaud Texas for doing the right thing and accepting the district court’s ruling against its law prohibiting 18-to-20-year-old adults from carrying firearms in public,” Cody Wisniewski, the coalition’s senior attorney for constitutional litigation, said in a statement. “Not only do young adults have the same constitutionally protected right to bear arms as all other adults, they are also among the reasons we have a Second Amendment, Constitution, and Country in the first place.”

The law was still in effect because U.S. District Judge Mark Pittman, a Trump appointee who used to serve as a justice on a Texas appeals court, stayed his order blocking it to give the state time to seek an appeal and, if an appeal was sought, for the appeals court to rule on it.

The law has led to criminal penalties for young people who carry guns, whether openly or in a concealed manner.

The law does not apply to young adults who obtain a license to carry a handgun, but another part of the Texas code states that a person must be at least 21 to get such a license.

“Accordingly, while Texas allows law-abiding adults 21 years of age or older—and 18-to-20-year-old adults in or honorably discharged from the military—to exercise their rights to keep and bear arms in public, the State bans ordinary, law-abiding adults who are 18-to-20 years of age from exercising their right to carry a handgun for self-defense in public,” the coalition said in its lawsuit, which was joined by several young adults seeking to carry.

At the same time, 18- to 20-year-olds can carry rifles, the plaintiffs noted.

Defendants argued that the law was constitutional under Supreme Court precedent, including Heller, in part because prohibitions on young adults carrying handguns have been around for years.

The Second Amendment of the U.S. Constitution states, “A well regulated Militia, being necessary to the security of a free State, the right of the people to keep and bear Arms, shall not be infringed.”

Pittman sided with the plaintiffs, concluding that “the people” include 18- to 20-year-olds.

The amendment does not mention age restrictions, and in Heller, the Supreme Court found that “the people” refers to “all members of the political community, not an unspecified subset,” the judge noted. Also, in another decision on gun rights, the court said that “ordinary, law-abiding, adult citizens … are part of ‘the people’ whom the Second Amendment protects.”

The population from which members of the militia can be drawn, meanwhile, includes “all males physically capable of acting in concert for the common defense,” the nation’s top court has said, or all able-bodied men.

Under the June ruling that saw the Supreme Court strike down a New York gun law, states that have restrictions on gun ownership and possession must show that the regulation “is part of the historical tradition that delimits the outer bounds of the right to keep and bear arms.” Texas did not do so in this case, Pittman ruled.

The Texas law “starts by prohibiting 18-to-20-year-olds from carrying a handgun for self-defense outside the home,” he wrote. “Only if a rare exception applies may an 18-to-20-year-old seek to obtain a license to carry. And rather than determining that a person in question is a threat to public safety, certain exceptions require an individualized determination before allowing a person to exercise their Second Amendment right.”