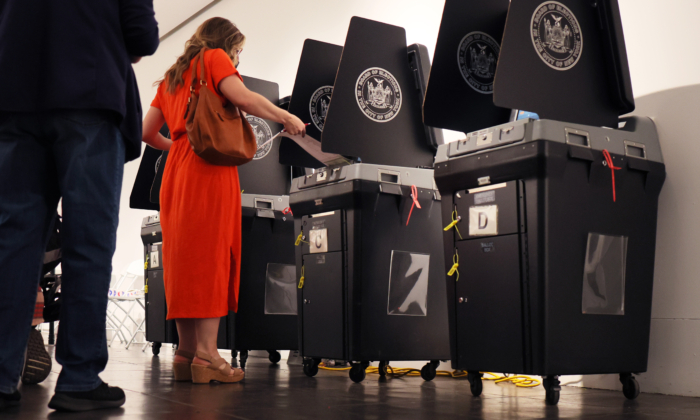 A person casts their voting ballot during the June Primary Election at Brooklyn Museum in N.Y. on June 28, 2022. (Michael M. Santiago/Getty Images)
JUDICIARY

The last sentence in Article 9-209(8)e of the 2022 Election Law—which has been amended recently by the Democrat-led state legislature—says: “In no event may a court order a ballot that has been counted to be uncounted.”

Freestone said the clause violated the Constitution and abandoned a long-time bipartisan tradition.

“[It] abrogates both the right of an individual to seek judicial intervention of a contested ‘qualified’ ballot before it is opened and counted, and the right of the Court to judicially review same prior to canvassing,” she wrote.

The justice also said that the amendment de facto suspended a long-standing practice: that a questioned ballot should be preserved for three days while awaiting judicial review.

The Epoch Times has reached out to the New York State Board of Elections for comment.

Jennifer Wilson, the spokeswoman of the state election authority, told the State of Politics that their office is still reviewing the ruling to share its view on the impact to the upcoming election.

The ruling is likely to be challenged in a higher court.

In New York election law, preservation and review of ballots are allowed in at least several circumstances, including election result audits and ballot contests.

The law clearly states that disputed ballots should be preserved for judicial review.

“The supreme court, by a justice within the judicial district, or the county court, by a county judge within his county, may direct the examination by any candidate or his agent of any ballot or voting machine upon which his name appeared, and the preservation of any ballots in view of a prospective contest, upon such conditions as may be proper,” reads Article 16-112 of the election law.

However, the disputed clause could, in its current wording, be argued to suggest that ballots can be challenged only before canvassing.

The timing of the ballot contest and accompanying judicial review could be re-extended to beyond ballot tabulation—as has long been standard election procedure until the changes slipped through with the new law—if the state appeal court upholds the ruling.

The Republicans who challenged the election law in this case have also asked the court to rule against the state’s new expanded absentee voting provisions.

During the COVID-19 pandemic, the Democrat-majority state legislature expanded absentee voting access in August 2020 to allow any voter who is afraid of the risk of “contracting or spreading a disease” to use absentee voting.