Judge Acquits Jan. 6 Defendant on All Charges, This man should have never been charged!! 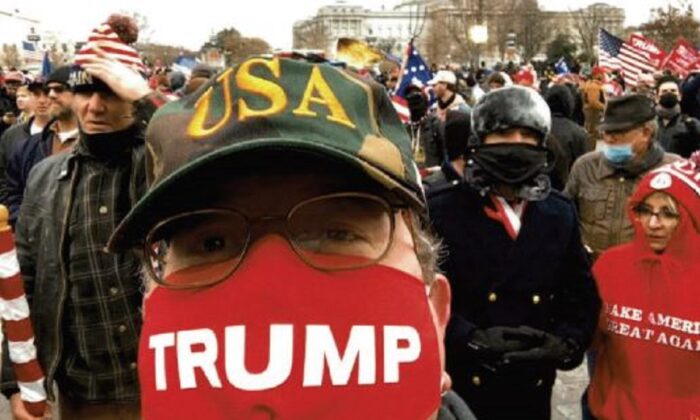 Matthew Martin in a selfie photograph taken on Jan. 6, 2021. (DOJ/Screenshot via The Epoch Times)
US NEWS

A federal contractor was acquitted by a judge on April 6 of four charges in relation to entering the U.S. Capitol on Jan. 6, 2021.

Prosecutors failed to prove that Matthew Martin, who worked at the Los Alamos National Laboratory in New Mexico, committed crimes when entering the Capitol for about 10 minutes, U.S. District Judge Trevor McFadden ruled.

McFadden, a Trump nominee, said it was reasonable for Martin to believe that outnumbered police officers allowed him and others to enter the Capitol through the Rotunda doors on Jan. 6. The judge also said Martin’s actions were “about as minimal and non-serious” as anyone who was at the Capitol that day.

According to court filings, Martin attended a rally held by former President Donald Trump on Jan. 6 before returning to his hotel, where he heard that the Capitol had been breached. Martin left the building and ventured onto the Capitol grounds before eventually entering the Capitol.

“While I was at the top, they started letting people into the building. And I—so I joined the—they were holding the doors open, the guards were. And I walked in and saw the rotunda,” Martin told an FBI agent during an interview.

Martin, whose bench trial started April 5, testified that a police officer waved him into the building after the riot erupted. A prosecutor dismissed that testimony as “nonsense,” although the government acknowledged in a filing that “police officers stood on either side of the doorway as the defendant entered” the building.

Video shows two police officers standing near the Rotunda doors and allowing people to enter as Martin approached, McFadden said. One of the officers appeared to lean back before Martin placed a hand on the officer’s shoulder as a possible sign of gratitude.

McFadden described Martin’s testimony as “largely credible.” The judge said it wasn’t unreasonable for him to believe that officers allowed him to enter the Capitol, even though alarms were blaring and broken glass was strewn about the floor.

McFadden also said there was no evidence that Martin intended to disrupt Congress from certifying President Joe Biden’s electoral victory and described the defendant as a “silent observer of the actions of others.”

Prosecutors had asserted in a pretrial brief that “the evidence will prove beyond a reasonable doubt that [Martin] committed each offense charged.”

“I think the definitive factor was that Matt Martin did not break the law,” lawyer Dan Cron, representing Martin, told reporters after the verdict. “We had the benefit of a lot of video evidence, and the judge had a chance to see it.”

“I am very thankful for the judge’s verdict, and I’m hoping to get my life back together and my job back,” Martin said.

More than 775 defendants have been arrested in connection with the breach. Approximately one-third have entered guilty pleas, and about half of the approximately 110 sentenced have received jail time.

Martin, who chose a bench trial versus a jury trial, is the first Jan. 6 defendant to be acquitted on all charges.

In another bench trial, McFadden acquitted Cowboys for Trump founder Couy Griffin on a charge of disorderly conduct but convicted Griffin of illegally entering restricted grounds.

The only jury trial to wrap up so far resulted in jurors convicting Guy Wesley Reffitt on five counts, including civil disorder.